This is an ongoing series of designing a story. This blog will cover character design and development. This information provided here is intended to inspire and offer insight to those looking for ideas and information to help with your own writing. Feel free to use the method given for your own work.

Previously we went over designing our story through a modified Snowflake Method. Now that the outline of our story is complete, we now need the most important part of our story fleshed out: our characters!

To design marines, I felt it was necessary to do a bunch of reading on the US Marine Corps, Delta Force, Navy SEALS and Britain’s SAS in order to get the right feel and organization for my story. Yes this story is in the future, but the military loves its tradition and so I feel that a lot of ranks and organization would carry over fairly well and it makes it easier for the reader to identify with the characters. As the son of a career military father, I also felt it was appropriate to give a measure of authenticity to the characters by using real life information.

First we will start with our main characters who are the members of 1st Squad. They are the top special forces squad in their platoon and the top platoon in the company. This isn’t a story about a third rate squad surviving when they shouldn’t have any hope of surviving. That would be a completely different story then what has been put together and doesn’t really do justice to our antagonists. Designing characters that are the best of the best who then get their asses kicked helps add danger to the situation and our aliens. Besides, who doesn’t like bad ass marines?

In designing our main characters, I decided to focus on the entire squad as the main character as opposed to just one or two. I think this will help push the idea of teamwork and why it is important for a squad to work together to complete the mission as opposed to just one person. Military squads typically are made up of 6 to 10 soldiers that generally range from Private to Sergeant. Special Forces units, however, don’t follow the typical range of ranks as soldiers come over from other units after passing a test and training.

First off, lets get some structure out of the way. Our Marine Corps is not just a single squad of guys, but part of a larger military force that loves to be organized. So we need a unit designation for our marines. Since we have the best of the best Special Forces marines, they would be part of a a Special Operations Battalion. This battalion would be broken down into different platoons (or a company) of soldiers that consists of multiple squads.  For the Battalion I picked the 7th for lucky number seven. Platoon and squad are both designated as 1st since they are the best. In addition, since they are the best, they should have a kick ass nickname. I like Hellcats personally.

The first thing I like to do when designing characters is to get their names taken care of first and how they group together between major and minor characters.

Other characters involved in the story

In our next blog, we will go into detail for each major character and flesh them out. Until next time, keep writing!

Prince of the Dawn Released! 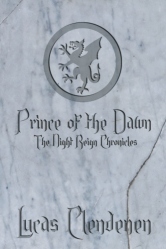